Evan Wardley, a former Pronghorns hockey player and the lead organizer of the “Together, One Community” rally held in Lethbridge during the summer wanted to go even further in addressing racism and discrimination in south western Alberta.

“After the rally, I knew there was still more work to be done on this issue, and there will be for a long time. Communities need to be unified and focused on working together, and that’s where the idea for the Unification Project Fund came from,” said Wardley.

Following the rally, Wardley reached out to United Way, a long-standing organization in the community which has a focus on addressing local issues through collective impact. 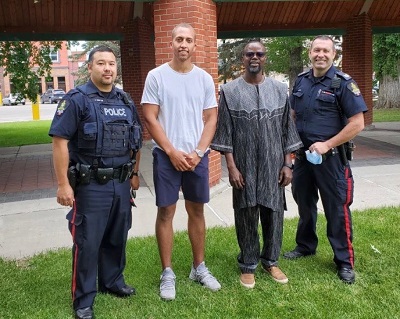 Evan Wardley (second from left) at the "Together, One Community" rally in Lethbridge.

“The purpose of the Unification Project Fund fits well with United Way’s vision of building stronger communities by working together,” said Vincent Varga, United Way’s Interim Executive Director. “Systemic racism and poverty are connected in many ways, and we won’t solve one without also addressing the other. We’re pleased to be able to work with Evan on this.”

The fund will be distributed annually alongside United Way’s Community Fund and will support programs and services that contribute to educating people about anti-racism and anti-discrimination, and those actively working towards solutions. The first allocation will take place in spring of 2022.

Wardley, who now plays hockey professionally in the U.S. says he aims to engage the hockey community on both sides of the border to help raise funds for the project.

“This is an issue that affects the hockey community too,” he said. “My family and I have experienced racism, some of my fellow players have too, and it’s never OK whether it happens. Whether it’s online or in person, to your face or behind your back, it needs to stop.”

Varga said that educating oneself and learning to recognize racism and discrimination, even in its most subtle forms is key to beginning to address it.

“Sometimes people can end up contributing to racism or perpetuating racist stereotypes simply because of a lack of awareness that certain phrases or behaviours are actually harmful to others,” he explained. “The education programs and services we’re aiming to support through this fund will ideally help people become more aware of the underlying and systemic nature of racism and discrimination, and help people learn to become better allies in building a stronger and healthier community.”

Those wanting to donate to the Unification Project Fund, in Canadian or U.S. funds, can do so by visiting www.lethbridgeunitedway.ca/UPF .